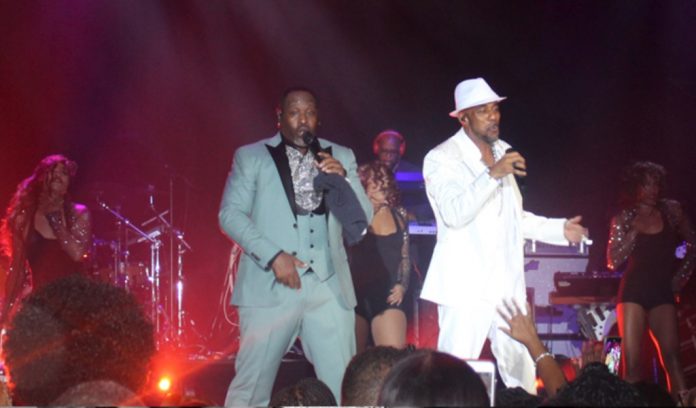 HANOVER, MD — A packed-house of about 2,000 folks, reflecting what sounded like screaming teenage girls, filled the seats at the newly-built Events Center at Maryland Live Casino.

The Friday night (Sept. 28) performance featured New Edition members Johnny Gill and Ralph Tresvant, this time as individual solo acts. The venue is located about half-way between Washington, DC and downtown Baltimore, and is adjoined to the Casino’s new hotel.

As opening act, Tresvant entered the stage clad in a cool suit with a white jacket and matching white button-down shirt with accenting sequined effects.

In between certain songs he’d change hat styles from a silvery-white baseball cap to a cool stingy-brim, old-school dressy top-piece. His external look was particularly suave on this seasonably temperate early-fall evening of about 65-degrees.

Tresvant wasted no time in satisfying the mostly-female audience comprised of an age-range from mid-40s to mid-50s. Their screams mimicked a generation past, when most were 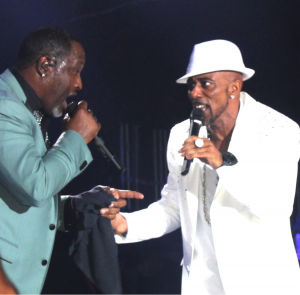 Tresvant’s fans when he headed the then-adolescent boy band, New Edition of Boston’s Orchard Park housing projects in the Roxbury section of town.

Ralph quickly delved into snippets of his series of solo hit tunes, including his biggest hit “Sensitivity,” along with “Do What I Gotta Do” and “Stone Cold Gentleman.” Ralph has cooly morphed from his kiddy style into a thin, debonair dude – with just enough swagger to make thug-looking guys in the audience take notice too.

Backed by a tight four-piece live rhythm section, interestingly, both Ralph and Johnny shared the backline band setup. Led by musical director Reggie “Wizard” Jones hailing from the Pittsburgh suburb of Aliquippa, Pa., the band was effectively driven by Atlanta-based drummer Melvin “Melly Mel” Baldwin, whose force and funk-laden poly-rhythms laid-down the impactful grooves as required for each singer’s various compositions. Melly Mel is a veteran showman, who recently toured with Justin Bieber, but is also well-known for leading rhythm sections during New Edition tours in their past 10 years. This writer recalls Jones as a teen prodigy with his first band, Rare Experience of Quiptown fame. Jones is also a former MD for Bieber’s tours. Other band members are Aaron Clay, bass guitar and Tomi Martin, lead/rhythm guitar. Gill’s performance was complemented by three outstanding, sexy dancers, namely, Tenile Jimenez, Britany Brown and Ashley Askins. The ladies performed moves straight from ‘90-based hip-hop video scenes, embellished with a new-millennium flair.

After Ralph tantalized the ladies for nearly 45-minutes, a fifteen minute set-break led to Gill’s onstage explosion to more roars and screams. Understandably, Gill served as headliner on this evening, mainly because he was a solo act prior to joining the NE boys in late 1987, when it was ironically then rumored that Tresvant was leaving the NE fold for solo stardom.

Gill performed all of his singular hits away from NE, including “Fair Weather Friend, “Rub You The Right Way,” “Wrap My Body Tight,” and his signature hit, “My, My, My” from 1990. The DC native followed up his smokin set with fan-favorites ballads like “Boys To Men,” “Can You Stand The Rain,” “Let’s Get The Mood Right” and “My Body, Your Body” the LSG hit single with Keith Sweat and the late Gerald Levert. Both Gill and Tresvant set the stage on fire, and provided an all-out party scene that was totally unexpected on this particular evening.

Gill displayed his veteran showmanship as a complete dancer and more than simply a standup balladeer – his initial image during this early years as a solo performer. His gospel background is still very apparent throughout his show however, given that he’s an original member of a gospel group featuring himself and his three biological Brothers – the Gospel Wings of Faith, of Washington, DC. At times, it felt as if he was a gospel preacher delivering, in this case, the “Love” word. It’s also now obvious that 30-years with NE has fully developed Gill’s choreographic tendencies to the point where he’s now considered a sho-nuff dancing man, who can move and groove with the best of ’em. Afterall, hanging out with Ronnie Devoe and Ricky Bell all these years has had full impact on his ability to become a dancin’ machine.

The Gill-Tresvant show is very entertaining, and has a throw-back, seventies flavor, reminiscent of Teddy Pendergrass when Gill throws out Teddy Bears to his adoring lady fans. Pendergrass was nicknamed “Teddy Bear” and also tossed toy bears to his fans in the mid-1970s. Tresvant returned to the stage to help his partner throw long-stemmed red roses to the audience, very reflective of Al Green or Marvin Gaye – during their ’70s heydays. And, the audience highly approved of Gill’s cover of Frankie Beverly and Maze’s “Before I Let Go” soul anthem. In fact, should Frankie B. ever retire, I suggest that Johnny Gill carry on the Maze tradition – he’d be a perfect replacement for Frankie B., as Maze Featuring Johnny Gill. The band also kicked off the evening with a smooth version of Heat Wave’s 1978 anthem “Boogie Nights” intro and later, played an interlude guitar riff cover from the Ohio Players’ 1974 “Fire” soundtrack.

While rumors flowed throughout the venue stating that Gill and Tresvant has quit New Edition, both Marvin and Loretta McIntyre — Gill and Tresvant’s Atlanta-based management, along with Brooke Payne, NE’s longterm Boston-based manager – all disputed the rumors, adding that the group remains intact, to the delight of NE’s longtime fan-base.

Ironically, less than an hour from Maryland Live Casino, on the following night, Ronnie Devoe, Bobby Brown, Ricky Bell and Michael Bivins were performing as a new group called RBRM, in Fairfax,Virginia on the George Mason University campus.

NE’s spin-off acts including Bobby Brown, Bell Biv Devoe, Gill-Tresvant and RBRM – results in a wonderful marketing ploy for the New Edition corporation, as a whole. Unlike their predecessors such as The Temptations, Dells, Stylistics and others – these spin-offs provide NE members another income stream for now and for the future – when the NE tour continues, they’ll have even more additional acts within the NE family fold to feature. Definitely a great business decision.

When the show concluded at Maryland Live, the lights were turned on, and so were the ladies; to a point where they just wouldn’t leave the stage area!

But when Ralph returned to the stage, joyful screams abound, as he offered hugs, kisses, autographs and selfie cell phone photos.

Nika White, traveled from Southeast DC to collect a Teddy Bear from Johnny G. “I’ve been a New Edition fan for a long time,” said the 40ish mother of two.

JaQuetta Washington displayed her cell phone case, which shows a photo of her with all six NE members at a recent concert. “Oh, I really cherish this picture,” said the Baltimore resident. 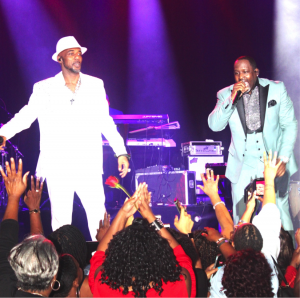 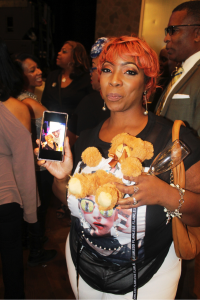 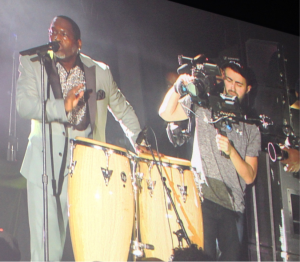 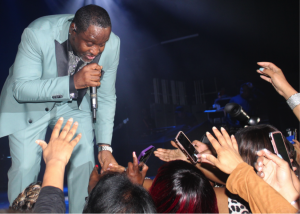 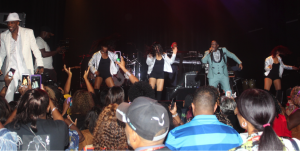 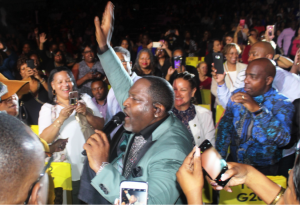 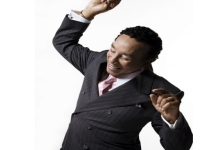 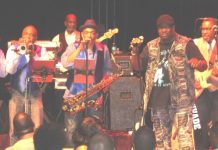 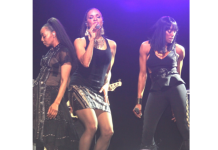 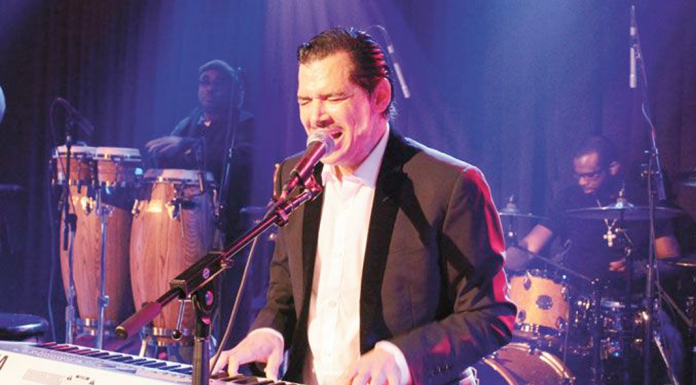