Namely, Gladys Knight, the reigning “Empress of Soul” served as opening act for the legendary Canton, Ohio-bred trio better known as The O’Jays. The Aug. 15 performance was stellar, considering it would be the evening before “Queen of Soul,” Aretha Franklin, would sadly enough, go home to Glory. Timely enough, Gladys made mention of her then-ailing friend and asked her audience for prayers during her solid gold performance.

“I would like for everyone to say a prayer for my Sister, “Ree-Ree, tonight,” said Gladys, noting that she and Ms. Franklin’s friendship stems from when both soul-stirring crooners were teenagers. “I first heard about the young singer from Detroit when my mother told me about her,” revealed Gladys.

Ms. Knight’s performance was expectedly stellar, as she delivered on her lengthy selection of solid-gold hits including “My Imagination,” “You’re The Best Thing,” “Neither One of Us,” and of course, her all-time signature “Midnight Train To Georgia.”

Notably, this writer was blessed to have shared Gladys’ stage in Augusta, Georgia – just two weeks prior to her DC gig. Along with my band, PlayBack “The Band” also from Augusta, Ga., our seven-piece unit including our featured vocalist Tutu D’Vyne, enjoyed a once-in-a-lifetime opportunity of hanging out backstage with the legend, while providing the musical foundation as opening act for her headlining role at the legendary William B. Bell Auditorium – a venue that’s hosted the likes of Elvis Presley, James Brown and on Nov. 7, 2018, will feature the rock legend, Bob Dylan and his band.

Back to the Aug. 15 DC performance, The O’Jays surprised many of their original fans when their set-list included an opening tune simply titled “Ship Ahoy.” The song, which was released in the fall of 1973, and featured their all-time classic “For The Love of Money” and “Put Your Hands Together.” Due to the LP’s then-controversial concept based on African slave ships and negative scenarios surrounding black American’s horrific trek to the Americas, it was very surprising that the group would re-introduce “Ship Ahoy” to its 2018 tour dates. Then again, based on current events in America, perhaps, it’s all so fitting that The O’Jays felt the need to provide a retrospective feeling of Black Pride to its performances. At least that’s my interpretation.

Regardless, we must credit the trio for their longtime durability. Especially, Eddie Levert Sr. and Walter Williams Sr. The two original members have both reached their mid-70s, but continue to work their same choreography from 40 years ago – moves created by “the old man,” legendary hoofer Charles “Cholly” Atkins of Motown fame and formerly of the Honi Coles/Cholly Atkins tap-duo from the 1940s. Third member, Eric Nolan Grant has been a member for more than 20 years and has earned his reputation as an authentic O’Jay. Grant’s moves are a bit more limber than his two cohorts and he’ll add a few high-jumps to his steps – mainly because his body is still young enough to do so. Grant is reportedly in his early 50s, and was close friend of Eddie’s late son, RnB crooner Gerald Levert, who died at age 40 in November 2006.

Also, it should be noted that on the evening of Friday, Aug. 10, Eddie Levert suffered from heat exhaustion during a performance at Atlanta’s Chastain Park (another outdoor venue) and was reportedly ushered off-stage by paramedics and emergency personnel. Fortunately, Levert rebounded well enough to hit the stage in full-force at Wolf Trap to the point, where it wasn’t at all noticeable that he ever had health issues just days before the Vienna, Virginia show in suburban DC. In a 2010 Cleveland Plain Dealer article, Walter Williams announced he suffers from Multiple Sclerosis, but continues to “fight on,” through workouts and a good diet.

Bottom-line – the O’Jays and Gladys Knight provided Wolf Trap’s 7,000 soul-music enthusiasts with an evening of unforgettable classic, authentic musicality. Add to the fact that Gladys’ drummer is the brother of Earth, Wind and Fire’s multi-saxophonist Andrew Woolfolk. That’s right Darryl “Footz” Woolfolk proved that older drummers are still vital, and should still be on top of the hiring list, when it comes to major artists’ tours –regardless of the musical genre.

During the DC bill, Gladys spotlighted Woolfolk for his ability to play drums in his bare feet. “I’ve never seen anyone play drums barefoot until I met Darryl,” she announced to her audience – to smiles and cheers.

In this case, Woolfolk proved both in Augusta and in DC that he’s a fabulous stick-man and is well worth his salary. Thanks Gladys Knight for all that you do, and special thanks to Eddie Levert, Walter Williams and Eric Nolan Grant, too!

(EDITOR’S NOTE: Legendary jazz-RnB vocalist Jean Carne attended the Knight-O’Jays show and was spotted backstage talking trade stories with her contemporaries. Carne, who’s known for her Philadelphia-based recordings, said she’s actually from Atlanta – but welcomes the “love” from her Philly fans. In the ‘70s, she recorded with Gamble and Huff’s Philadelphia International Records along with The O’Jays. She also noted working with PlayBack “The Band” during a UNCF event in Augusta, sponsored by Paine College. “It was at an amphitheatre,” she recalled with a smile – specifically, the Jessye Norman Amphitheatre, the venue named for the Augusta-born, internationally-renown opera singer. 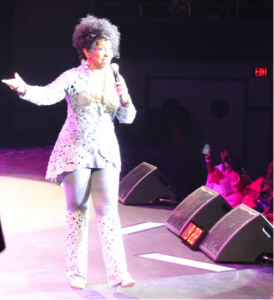 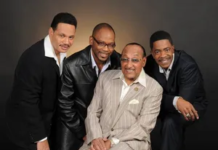